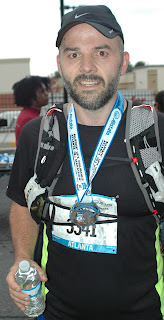 Whilst biking is a great cross training exercise, I still had a few more races to prepare for in 2012.  Namely a 10km fun run, followed the next day by the Atlanta ½ Marathon and then later in October the Amsterdam ½ Marathon.


Nikki decided to sign up for another training programme with Run Keeper (they're now free too) while I decided to go it alone and manage my own schedule.  The main focus race was the Amsterdam ½ Marathon on 21st October 2012, during which time Tony, Julie and Sarah would be running the full marathon, so I knew what sort of preparation I needed to put in.  This time with my own training schedule in hand, I upped the weekly mileage to around 40-43 miles per week, which I coped with quite well, although it did mean stepping down the bike mileage on my off days.

My schedule coming in to October was to run long on Sundays, have Monday as rest day, Tuesday do some speed work, Wednesday slow run, Thursday tempo run, Friday rest day and Saturday a slow shorter run.  This wasn't dissimilar to the Run Keeper training schedule but this time I was increasing the mileage beyond the 30-35 you peak at on their programme.  I was pretty careful and increased my mileage in sensible chunks, all without injury thank goodness. 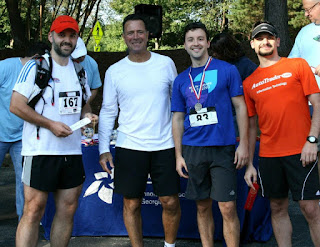 The first race in October was the TAG 10km, this is the Technology Association of Georgia (TAG) and open to it's companies and their families.  It was a two loop race on a closed road in Technology Park, Norcross, GA, although this wasn't a flat course, with each loop there was about 260m of elevation change.  Discovering this on race day was I think better than having it play on my mind leading up to the race, every cloud and all that. 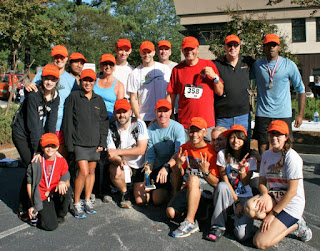 Race morning had us meet at the local Starbucks (I gotta have my coffee) and head over to the parking lot near the start line.  We had quite a few members in our 10km team as well as a 5km team and even some friends & family members.....a good turn out for early Saturday morning.  The race went really well and I managed to log a PB of 48 minutes 20 seconds which I was very happy with indeed (full results) and even more so when I won a prize for 3rd in my age group (out of 15), my first proper win!  Overall the team did very well, although we didn't win the overall prize, David Brunner won the 10km outright and Chris Clarke & Harish Mandala both won age group prizes too. 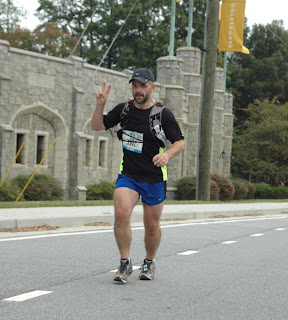 The following day was the Atlanta 13.1 Marathon (not a ½ apparently) and another early start.  Harish, David, Karen and Chris Clarke all took part from the office and we met up outside the coffee shop near the start line in Brookhaven Atlanta (course map).  7am start time meant that we started in the dark, which was a first for me and they certainly didn't setup enough temporary lighting in some of the first few miles.  The early start did mean the temperature was perfect for running and the rain held off, which provided near perfect conditions for me.  I ran the first part of the race with Chris Clarke, who was walking for 1 minute every mile, then I managed to pull ahead a little (even after a rest room break) and finished in a new PB of 1 hour 49 minutes 3 seconds (full results).  This was the cherry on the cake for me, two races in one weekend, both setting PBs, perfect! 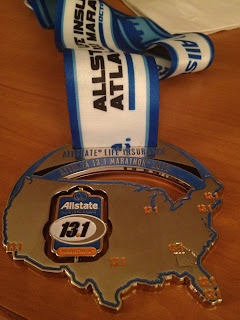 That left one final ½ marathon to complete, the Amsterdam ½ and this time I'd be running with Nikki.  I had made myself a promise that if I got round the Atlanta course in under 1 hr 50 minutes, I'd run the Amsterdam race side by side with "she who must be obeyed at all times".  As it happened this really helped me in Amsterdam because I was concentrating on getting Nikki round in under 2 hours (her target) and not really concentrating on me or my running for a change.

Amsterdam turned out to be a great weekend away with some wonderful friends, a few beers and a bit of running thrown in resulted in me really enjoying myself.  Nikki and I flew in a little later on the Saturday as Nikki had just landed that morning from the US and was feeling a bit tired.  The ½ marathon didn't start until lunch time on Sunday so we had a bit of time on our hands, although we did get up early and go and support the others who were running the full marathon. 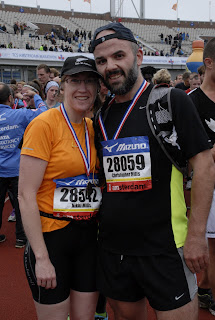 The weather wasn't perfect, it was a little cold, especially waiting around at the start.  The pens weren't particularly well organised and they delayed the start, not that we could hear why, we didn't even know the gun had gone off when it did, madness!  Anyway we were off on the wonderful flat course around Amsterdam, which if I'm honest wasn't quite as picturesque as I had imagined.....we ran out on some industrial park which was a real eyesore and there weren't many people out cheering us on.

The course wasn't particularly wide and with the number of competitors (15 thousand or so) it meant that we had to navigate around people and even at the end the odd person was bumping in to us.  The drinks stations were likewise not the easiest to make use of, the course narrowed even further and people slowed & stopped to collect water/sponges etc.  Luckily I had my Salomon backpack on so I was good for water so Nikki just grabbed whatever was available and we continued our quest. 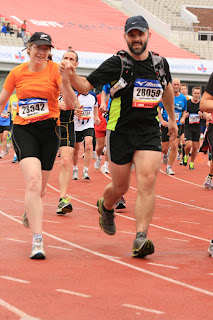 The final few miles of the course take you through Vondel Park before you continue back to the Olympic Stadium, where you complete half a lap to take the total to 13.1 miles.  Nikki and I crossed the line holding hands, with big smiles and under the 2 hour time - the official time for both of us was 1 hour 57 minutes 31 seconds (full results, our results).

Both Nikki and I were happy with the result and it was nice to see Andy & Sarah waiting to wave us across the line. Sarah, Julie & Tony all completed the full marathon although I'm not sure any of them had the day they wanted; never mind at least it wasn't a DNF!

Now time for some dinner, somebody point me in the direction of the nearest Gaucho restaurant.........