The 28th April was a cold, damp morning and a far cry from the 30C weather Madrid had been experiencing in the lead up to the Marathon weekend.  I for one was quite happy with the 5-6C forecast, a small chance of a shower. A typical British early Spring day.

Having rested up for quite a bit of Saturday, after enduring the delayed coach trip out to collect bib numbers, I was up around 0630 on race morning for some breakfast.  The hotel buffet was full to bursting, the two small toasters were taking a hammering from the impatient crowd, whilst the worlds supply of bananas were forklifted on to the table as quickly as they were being eaten.

Back in our room, I sorted my bib number and packed a bag which Nikki would have ready at the finish line. We left the hotel just before 8am and walked to the start area.  We walked up and down the start line, made final arrangements for meeting up after the race and agreed a midway point and estimated arrival time at around the 17km mark.  Then it was a quick trip to the toilets, which were surprisingly clean with not much of a queue, before heading in to corral #5.

A few moments before the start we had the pleasure of chatting to an Italian who was running his 2nd Madrid Marathon.  Nikki had her Boston jacket on and we talked about the terrible events of the 15th April.  He informed us that he runs as a pace maker for the Turin Marathon, where they have 12 pacing groups normally.  This year they are adding a pacing group specifically to run the course in 4.09 which was the time on the clock when the first bomb went off.  A lovely and fitting tribute.

The gun went off at 9am and about 8 minutes later I crossed the line, waving to Nikki, Matt & Lauren who were my support crew for the day.  As is typical of races that start multiple events at the first few miles were fairly crowed, things eased up a bit after the 10km race peeled off. 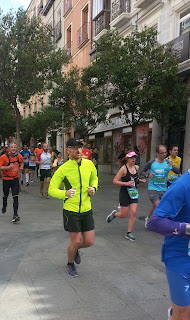 After the half marathoners peeled off we ran through some narrow city centre streets where my support team waved me on.  My left quad, or actually to be more precise my sartorius muscle and not a quad, had been giving me gip for the past week but nothing more than a niggle.  This got progressively more and more annoying throughout the race but at this point it was something that I felt I could manage.  I hit the half way point in 1 hour 49 minutes and was feeling pretty good.

My strategy had been to take a gel at the halfway point, another around the 20 mile marker, with two further gels in my pocket as required.  This strategy soon went out the window as my first gel caused me stomach cramps that slowed me down and I found myself running and walking from mile 15.  Not great but my target time of around 3.45-3.48 was still just within reach and certainly the sub 4.00.

I had my heart rate monitor on and although I haven't reviewed the data yet, I remember thinking my pulse was quite high and that I needed to slow up a bit. I was drained of energy, feeling very thirsty but the moment I took onboard fluid I felt bloated and pretty sick.  Madrid we have a problem!

The back half of the Madrid course isn't hilly but there is an incline and it appears to go on and on.  I walked almost all of the last 10km, determined not to wimp out.  I was going to get to the finish line. It was a low point when the 4hr pace guys went past me but by then I was just thinking of getting over the line.  I kept thinking it was good training just having the time on my feet.

As we rounded the final corner, I pushed myself to run the final few hundred metres, probably knowing that the family would be watching spurred me on.  I crossed the line in 4.12. Not bad for a first marathon and I wasn't anywhere near as annoyed with myself as I had expected I would be.  For those who know me, this is completely out of character.

My legs were broken, my stomach was doing somersaults and I really didn't want to be in a crowd of people queuing to get out of the finish area.  I collected my medal, got wrapped in a plastic (not foil) blanket and fought my way out.  The first piece of grass I saw I collapsed on to, I needed some time to rest up.  I pinged Nikki and they came to meet me, by which time I was freezing.  In fact I think I was getting cold for the last 3-4 km, as I walked rather than ran and the wind was picking up quite a bit.  Now I was regretting it not being a typical Madrid Spring day.

Warmed up by the extra layers we walked the mile back to the hotel where I collapsed for an few hours rest before heading out for dinner.  Food and water, plus one small beer helped sort me out, before another little lie down and 2nd dinner (I'm a hobbit) and then bed!

Flying back home this morning I can reflect on my performance and I'm not as disappointed as I thought I would be.  I've never felt so rough from running, I've bonked before but never have I had the stomach issues, a slight injury and been so thirsty yet couldn't drink.  The combination of these things all occurring at the same time were pretty much outside of my control.  My only regret now is that I wish my brain had been functioning as my four hour (secondary goal time) slipped away, I wish I'd been able to hit the 4.09 Boston time, maybe next time hey?

I have some homework to do reading up on how can I prevent stomach issues like this from occurring again.  I've tried the gels before and never had issues, in fact Nikki always says to me that I'm a machine how I can eat and run.  Perhaps I need to look at some alternative fuels (homemade? Chia seeds?) or not fuelling and just going without.  I wonder what would have happened if I'd not had any gels yesterday.  With the clock ticking to my 50 miler next month, I need to figure out a strategy and quickly.
Posted by Chris Mills at 15:43