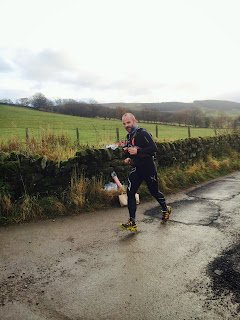 Running in an almost completely new location and a different distance to my other races in 2013, made the Frostbite 30 sound like fun.  Besides the fact Nikki and I got to return to Jelley Legs again, where we are welcomed like old friends and enjoy David and Damaris' home cooked meals and wonderful company.  That was why I entered the race and also because December looked particularly empty with my last event being back in September, I had to find a filler.

Heading up to Ripon on Friday, I was less concerned about the race itself and more concerned with the sore throat I'd had for a few days, since running a few night time miles during the Winter 100 the week before. I was also carrying some fatigue going into the race and I'd pretty much decided to take it easy and enjoy the jaunt around the Yorkshire Dales.

Upon our arrival, I headed out for a short run around the park to shake out the long journey and then I set about preparing my kit for the next morning. The weather had been up and down and it had threatened snow at one point and so I'd packed every piece of kit imaginable.  In fact my bag for the weekend was bigger than my bag for the two week business trip I was heading out for the following Monday.  Anyway, I sorted out what kit I wanted to wear, what I was going to carry and what I'd leave behind, which was most of it luckily.

Friday night was one of those nights when you wake up every 15 minutes thinking you have overslept and you grab your watch and almost jump out of bed, only to find you have hours until your alarm.  This was only made worse by having the two dogs in the room with us. They normally sleep downstairs so spent the entire night nudging my arm or sniffing at my face, like I needed waking up even more!

0630 came around eventually, my throat was sore and I was tired.  Coffee was to be my saviour and after a couple of cups of strong coffee I was feeling more human as we all piled in the car and headed for the Scout hut in Pateley Bridge, where race HQ was. 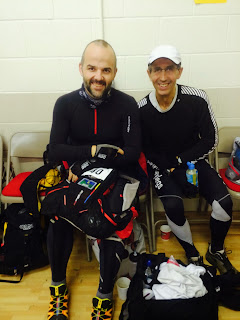 Registration was painless, with the very reasonable £15 entry fee exchanged for a Berghaus technical t-shirt, 9 bar, my number (40) and a map of the route, I made my final kit preparations.  With another cup of coffee inside me and the water bottles topped up, we were soon counting down to the start, with the hooter sounding at 0900 exactly.

Knowing I always start too fast I tried hard to force a slower pace from the off, aiming for 10 minute miles but actually ending up slower than that due to the gates and styles we had to open/cross in the first 2 miles.  The route follows the Nidderdale Way mostly with a quick detour off to the East to tack on a few miles and a bit of additional climbing.  With 5 aid stations dotted around the course, we were never alone for very long and by the time the first aid station came about everybody had found their race pace.

It was around this first aid station where I met two gents who I ran most of the race with. It always amazes me how everybody chats and makes friends in these types of races, it certainly isn't something I've experienced in shorter distances very much, if at all.  As we chatted away we enjoyed the beautiful countryside that surrounded us and we even saw the sun, albeit briefly and it certainly didn't offer us any warmth.

Arriving at the next aid station, Nikki was there to cheer me on, along with Martin (a friend of David Jelley who we'd also met the year before) who had decided to call it a day.  He says his head wasn't in it but others tell me he had a new road bike and secretly wanted to go home for a ride!

The wind picked up and I soon had to put on a wind proof jacket to keep the chill off.  The irony here is that it was in almost the same location a year previously where Nikki had complained of the bitter cold and I'd told her to "run faster". It brought a smile to my face as I plodded along the ridge line heading for Scar House reservoir and the almost midway point.  We clocked in well ahead of the cut off and disappeared quickly on to what was the hardest part of the course. 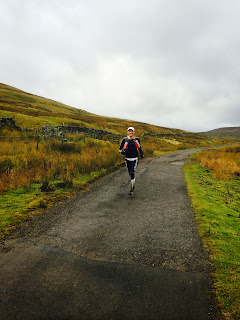 Up until now the pathways had all been very runnable and whilst a bit rocky and water logged in places, it was easy underfoot.  This changed as we made our way around the waters edge, cutting in and out a few times and crossing the odd bridge, the pathways were marshy with tufts of grass surrounded by deep mud and water.  Luckily my shoes wick water quickly but that doesn't make it any less energy sapping on the legs or taxing on positive brain power.

After reaching the gravel and tarmac pathway, my spirit was lifted although I think the toll had been taken on my hamstrings and glutes.  Following the other side of the reservoir my stomach started playing silly beggars and I started to deviate from my food plan (250 cals per hour) in the hope of it settling.  This obviously then had an impact on my energy levels later in the race and ultimately slowed my pace further but I had no choice.

Turning upwards from the reservoir with one last long climb, we soon reached the downward pathway to the last two aid stations before crossing back over the valley and rejoining the first 4 miles of track we'd covered earlier that day.  The pathway down to Middlesmoor was quite enjoyable and easily runnable but due to fatigue I had to walk run this section more than I'd have liked.  After leaving Middlesmoor the route became somewhat boring with less views and what felt like endless fields with the odd animal in it.  This appeared to go on forever and I remember looking at my watch only to find it was only 0.1 of a mile since I'd last looked, 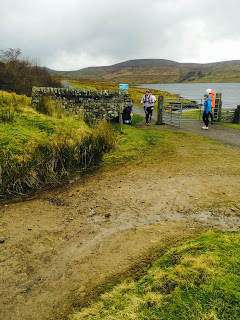 On the home straight the final 4 miles were quite enjoyable and we ran most of them, we even overtook a few people in this section, which is always a nice feeling.  Nearing the final few hundred metres I felt very tired and I was quite pleased it was the end of only a 30 mile race.  I'm not sure I would have finished it if there had been another 20-25 miles to go, it brought home to me how strong mentally the people are who race the Piece of String race.

For such a short race in comparison to the 50 mile distance, this blog post has gone on quite long enough already.  So I'll finish up with another big thank you to Nikki, who once again was at every aid station cheering me on and supporting me in my quest to stay [somewhat] healthy.

Oh and if you ever fancy a weekend away running, biking, walking or just relaxing in beautiful countryside, I highly recommend you checkout the Jelley Legs website.  You won't regret it, I promise!
Posted by Chris Mills at 23:09