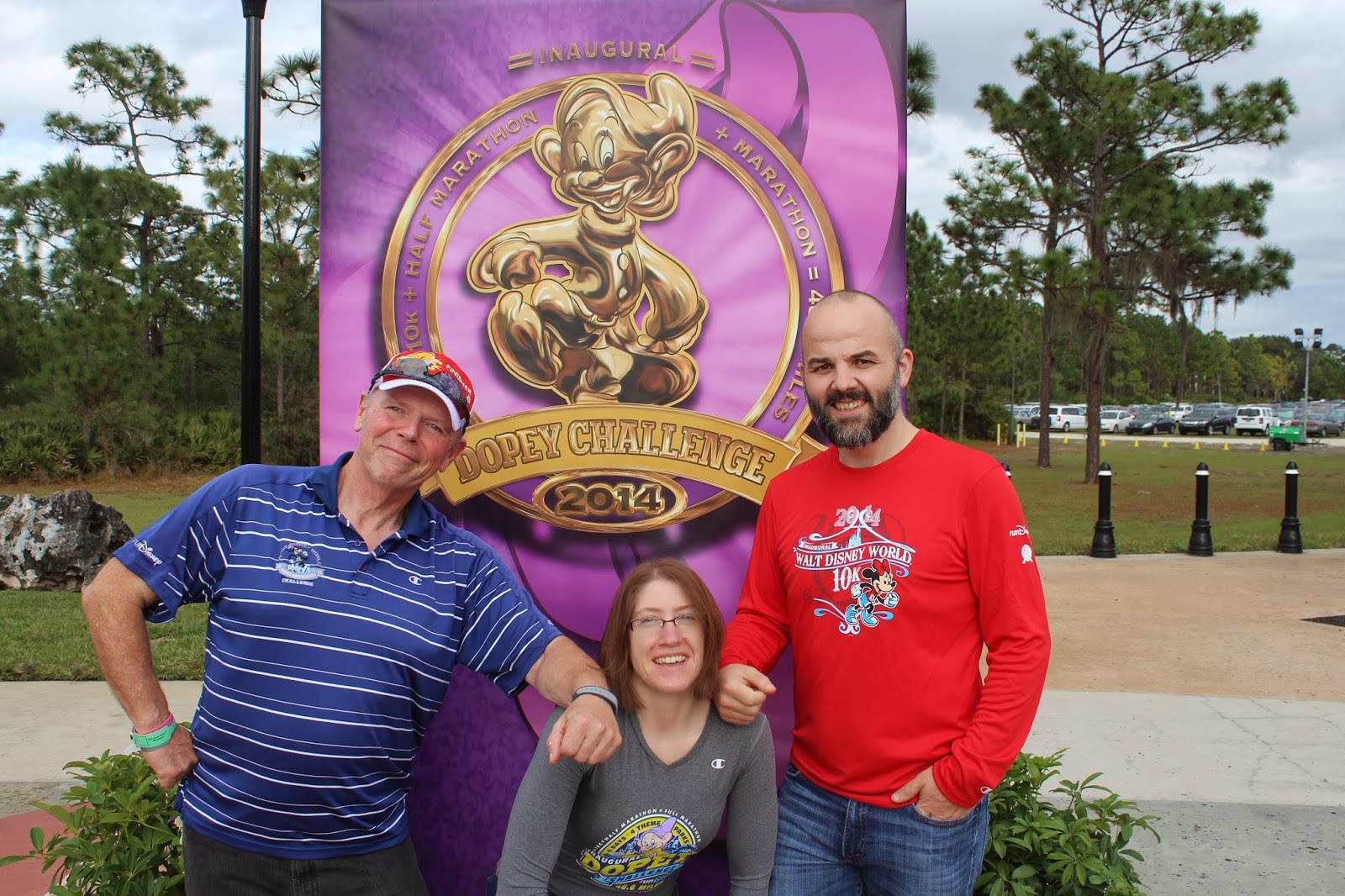 The first race of the year and what a way to kick it off with a visit to Orlando, Florida. Goodbye bad Winter weather and hello sunshine and blue skies. And so it was, that Nikki and I departed London on Wednesday 8th January 2014, heading to Mickey's backyard to run not 1, or 2 or even 3 races, we signed up for the Dopey Challenge.

What's that then? Well it's 4 races on consecutive days with increasing distances.

Day 1 is 5 km.
Day 2 is 10 km.
Day 3 is 13.1 miles.
Day 4 is 26.2 miles.
I run further in a training week than this, so it should be easy enough right?
Well actually no! The combination of fatigue, the heat, the humidity and the heavy pounding on the road surface really does take it out of your legs and I was quite surprised at how sore my quads were after we'd finished. I guess I need to work more on my running economy to ensure I use my hamstrings more to push me around. 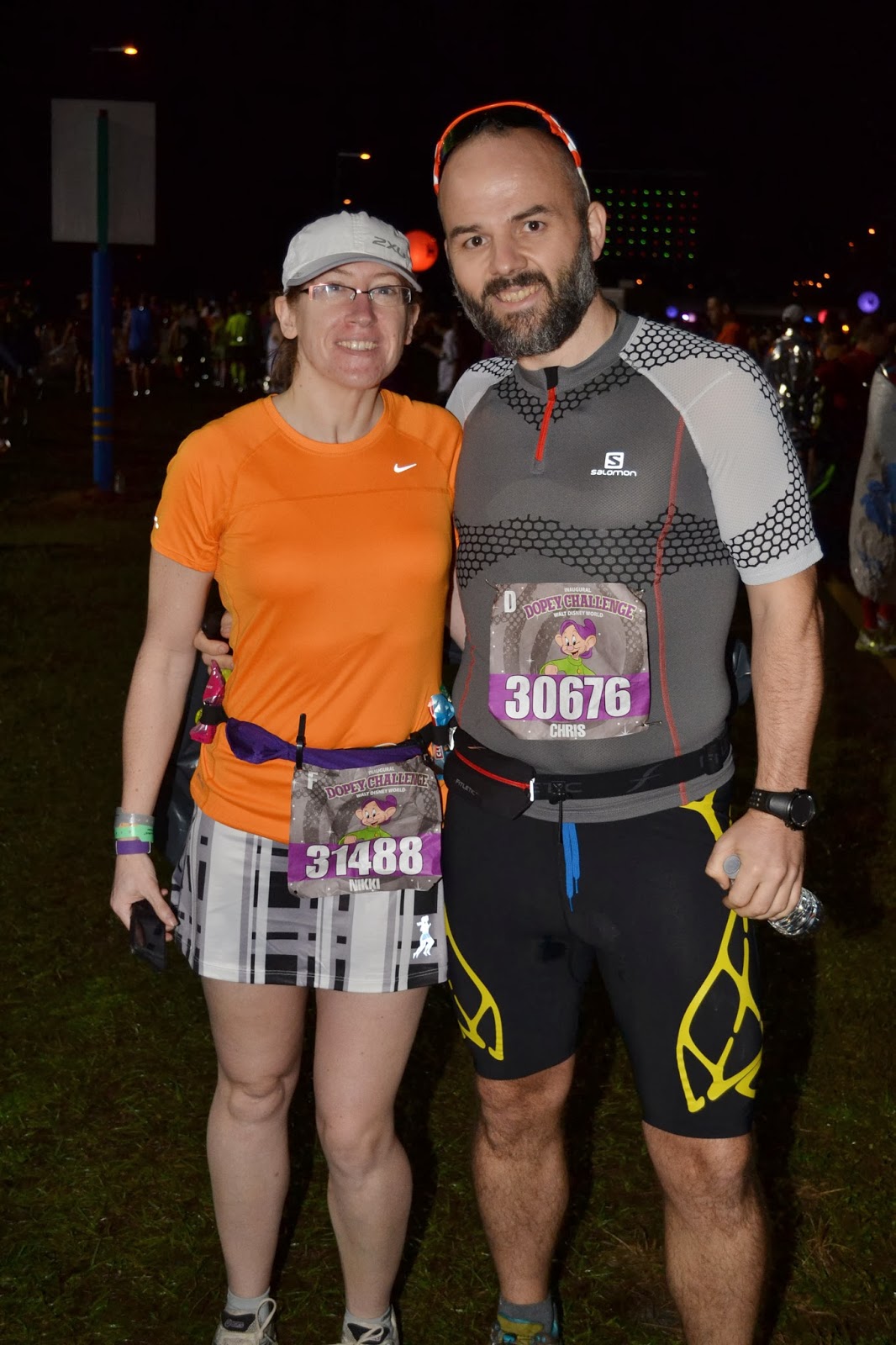 An early start with the alarm going off at 4am, we were soon indoctrinated into the runDisney way of things. We were under strict orders to be on the buses before 5am for the very short journey to the start line. I have to admit the process of getting people from all of the hotels to the start line and then into the corrals went like clockwork. Even the queues for the toilets was acceptable, which is unheard of at almost every running event I've ever been to.
Nikki and I left John and Janie in their corral and made our way to the 'A' corral (that stands for Almost elite). The race was a staggered start, with each corral supposed to be released shortly after one another. As it turned out, I was finishing the race just as Janie had been set off on to the course.
This short sharp race went well and I felt full of energy from the off, so I pushed myself around what turned out to be the most boring location for the first 1.5 miles. After this we left the car park for a quick trip through Epcot and back to the finish line. Surprisingly I'd set myself a new personal best, completing the course in 21 minutes 31 seconds (my watch clocked 21:14 but I'm using chip times).

An even earlier start had the 4 of us heading to the bus for 4am this time, it's the only time I've been grateful of jetlag. The race start time was set for 5.30am, mainly due to the fact they had more competitors that the 5km and Disney wanting to open the parks on time, means they have to get everybody around the course before official opening times.
Back in the same corrals as yesterday and with Mike Wardian out front with a few other named runners like Jeff Galloway and Dave McGillivray we were under starters orders and off bang on time. I kissed Nikki goodbye and headed off on to the course, agreeing to meet near the bag collection near the finish line.

Today's course was 3 miles of roads and car parks, which again was kind of annoying/boring but the back half of the course was much more enjoyable and took in more of Epcot and a loop around the Boardwalk.
During the first half of the race, there was an out and back loop where I heard somebody shouting "Run faster fatty". I looked down to my right and saw Nikki shouting up at me, obviously she wasn't running fast enough if she could still talk whilst slowly making her way around the course.
I crossed the line in another personal best time of 47 minutes 1 second but I was certainly less comfortable than the previous day, perhaps I'd pushed myself a little too much.

It was beginning to feel like groundhog day, getting up, eating, getting on a bus, queueing for a portable toilet, entering a corral system and then running around Disney World. Today was slightly different, it was hot and humid and it was still very early in the morning, today could be a lot harder than anticipated. 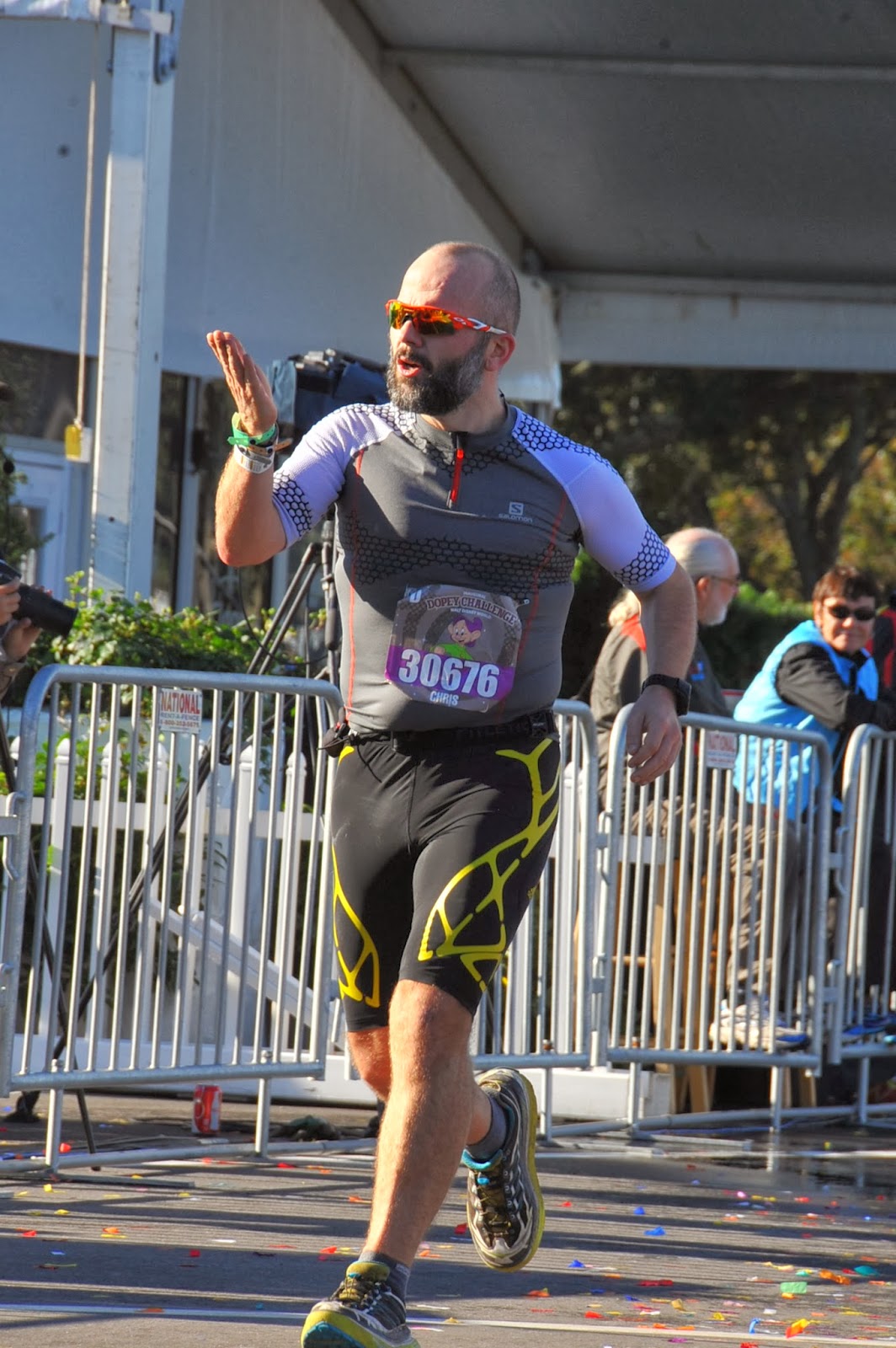 Our corrals were different today, with many more runners (25k) there were now quite a few corrals and all 4 of us were in different starting positions. We said our goodbyes and prepared ourselves for the off.
Today's race was started by Donald Duck with a 2 minute gap between corrals and more fireworks than you see at most bonfire night parties in the UK. They really were wonderful to watch as we marched forward in our respective pens. I was lucky to be fairly close to the front and didn't have a long wait before the big duck got us underway.
I had a race plan today, to slow down a bit, knowing I wouldn't be able to run a PB given the heat and the fact I had a marathon to run the next day. So I sat back (a bit) and enjoyed what the course had to offer, which was some road but also included the Magic Kingdom and Epcot with the finish in the shadows of Spaceship Earth.
The weather took it's toll on me and I was sweating much more than normal which caused my shorts (which were drenched) to rub the tops of my legs raw. Not as bad as occurred to Nikki, who had a similar experience but her legs ended up looking worse than mine. I crossed the line in 1:48:24 with Nikki coming in shortly afterwards in 2:39:29. 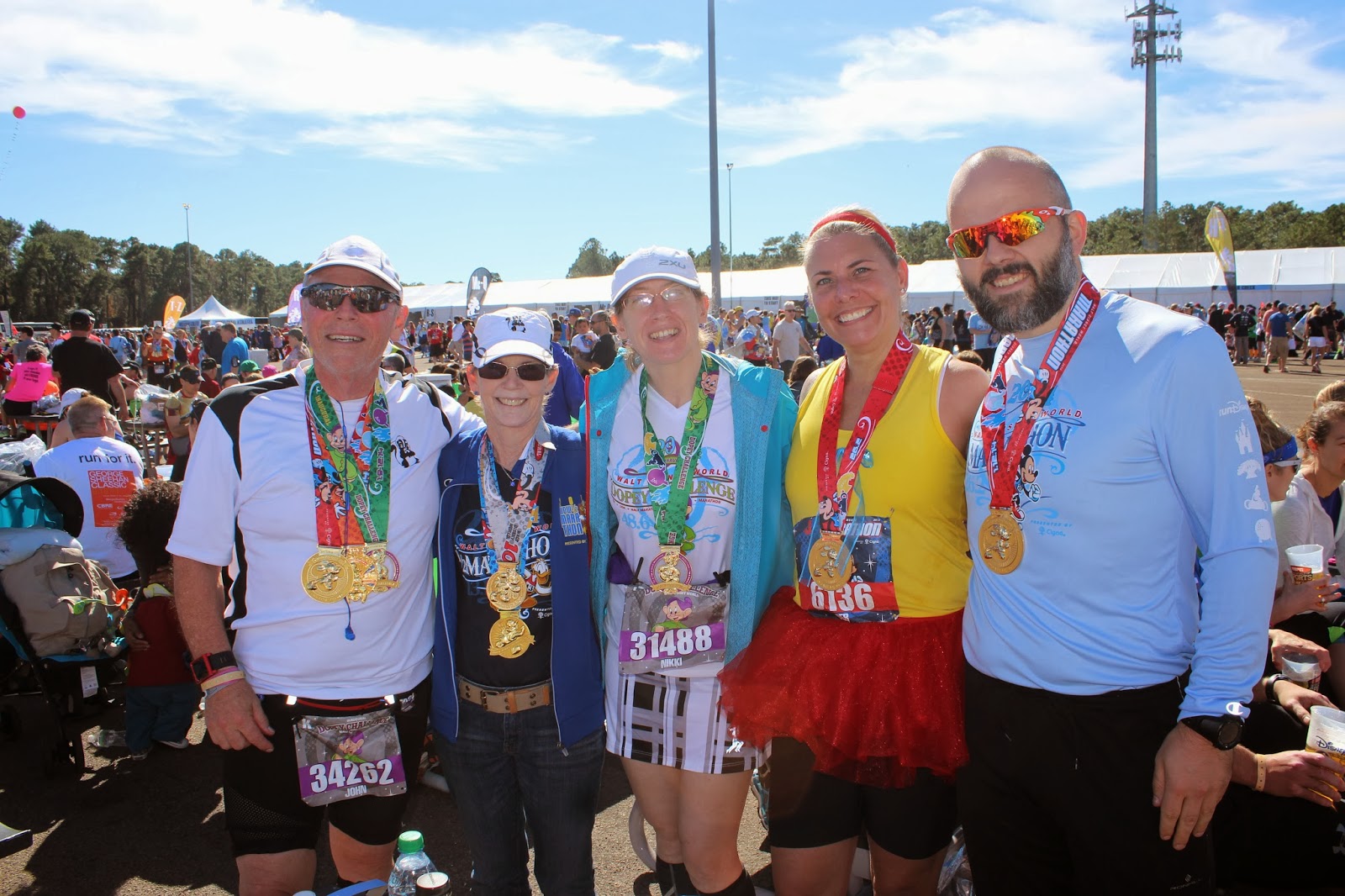 I didn't wake up thinking thank goodness this is the last day but I was pleased that soon enough I could return to running on trails as my legs certainly noticed the impact difference that the roads brought. John was a little jaded as well as disorganised this morning, although we put that down to the fact that Janie wasn't there to help him dress, eat, walk, run etc.
After getting the normal bus to the start line, we managed to lose Nikki after a toilet visit although we did finally meet up just prior to having to split off into our respective corrals. We had the same Disney characters up on stage but Mickey kicked us off with even more fireworks than yesterday.
My goal for today had been a 3.45 marathon and for this I knew I'd need to pace myself carefully so that I didn't go out too fast, which is exactly what had happened in Madrid. So I hung out with the 3.45 pacer for the first mile or two, before deciding I needed to get ahead so that I could stop and use the facilities, after which I had a shorter distance to catch up with them. 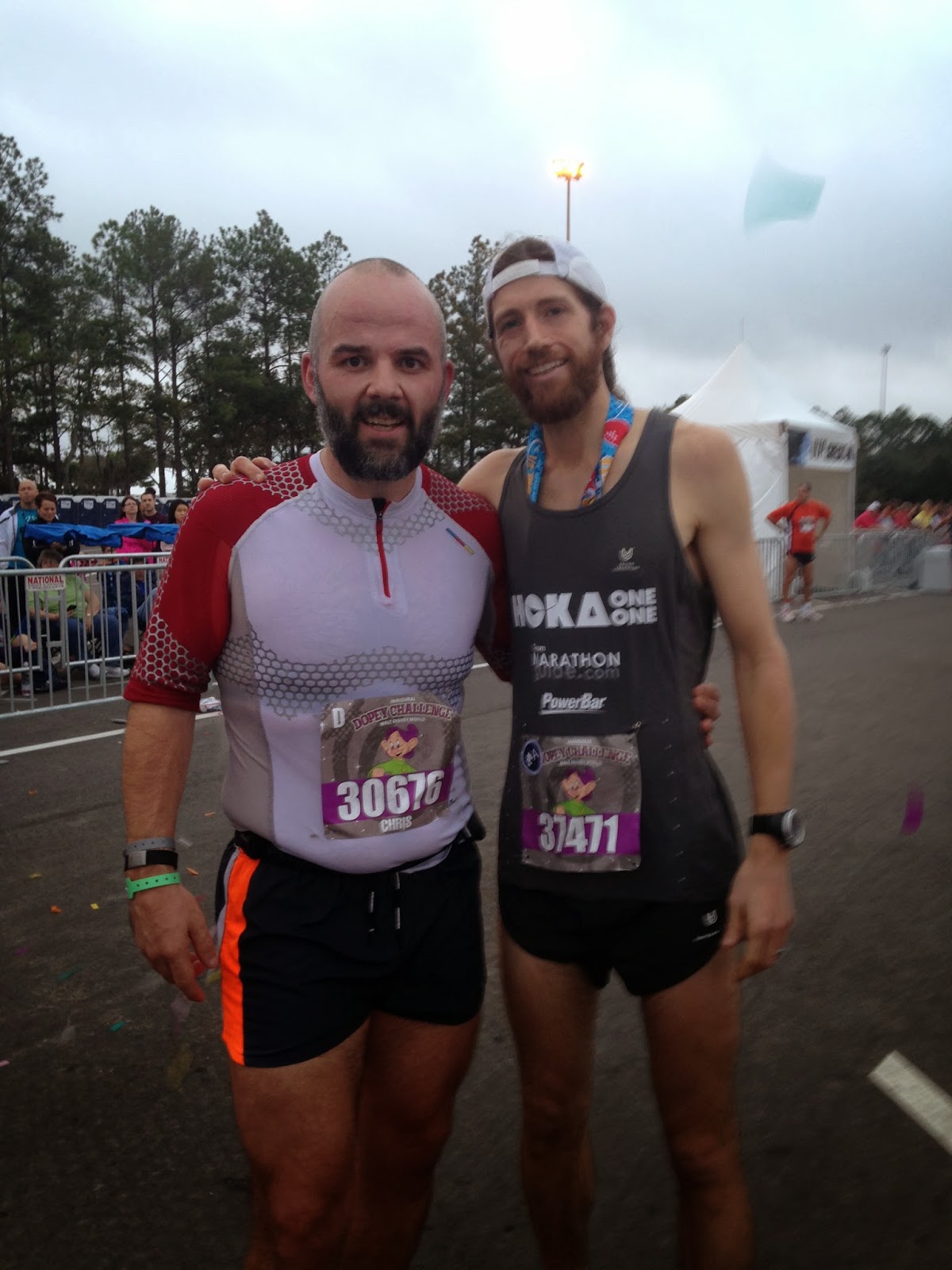 Around 6 miles into the run, I was getting annoyed with the number of people hanging around the pacer, as well as the non stop talking from the pacer himself. Not only was it incessant, he was loud too and so I decided to run a little ahead of the group where there was plenty of space.
This was to be my undoing as I started to run too fast, getting further and further ahead of the pacer. As we headed through the Magic Kingdom, on to a loop of the Speedway and then down to the Animal Kingdom, I was getting further ahead of where I should have been. As we entered the ESPN Wide World of Sports I started to slow down, paying the penalty for not pacing my run. This couldn't be a repeat of Madrid, I wouldn't let it. I had to ensure I came in under 4 hours, no matter what!
With less than 5 miles to go the 3.45 pacer passed me, still chattering away but with a much smaller group of people around him. They'd either been bored into running faster or they'd burnt out too early. I was determined to continue and try to keep them in sight, although I was slowing too much and had to let them go. Less than 2 miles to go I saw Janie on the boardwalk which helped spur me on to the finish line.
I crossed the final finish line of the week in 3:50:52, tired but very happy to have completed the first Dopey Challenge. Nikki wasn't long behind in 5:06:12 and John a little further back completing it in 5:48:59.
I really enjoyed myself, having been to Disney before it gave me another view of some of the parks. Would I run it again? I'd have to say no, only because running on roads doesn't work for me and I also don't like big races particularly. I prefer the solitude and beauty that running in the hills on trails provides but I would recommend this event to road runners, it's well organised and is a fantastic challenge plus you get to visit Disney! 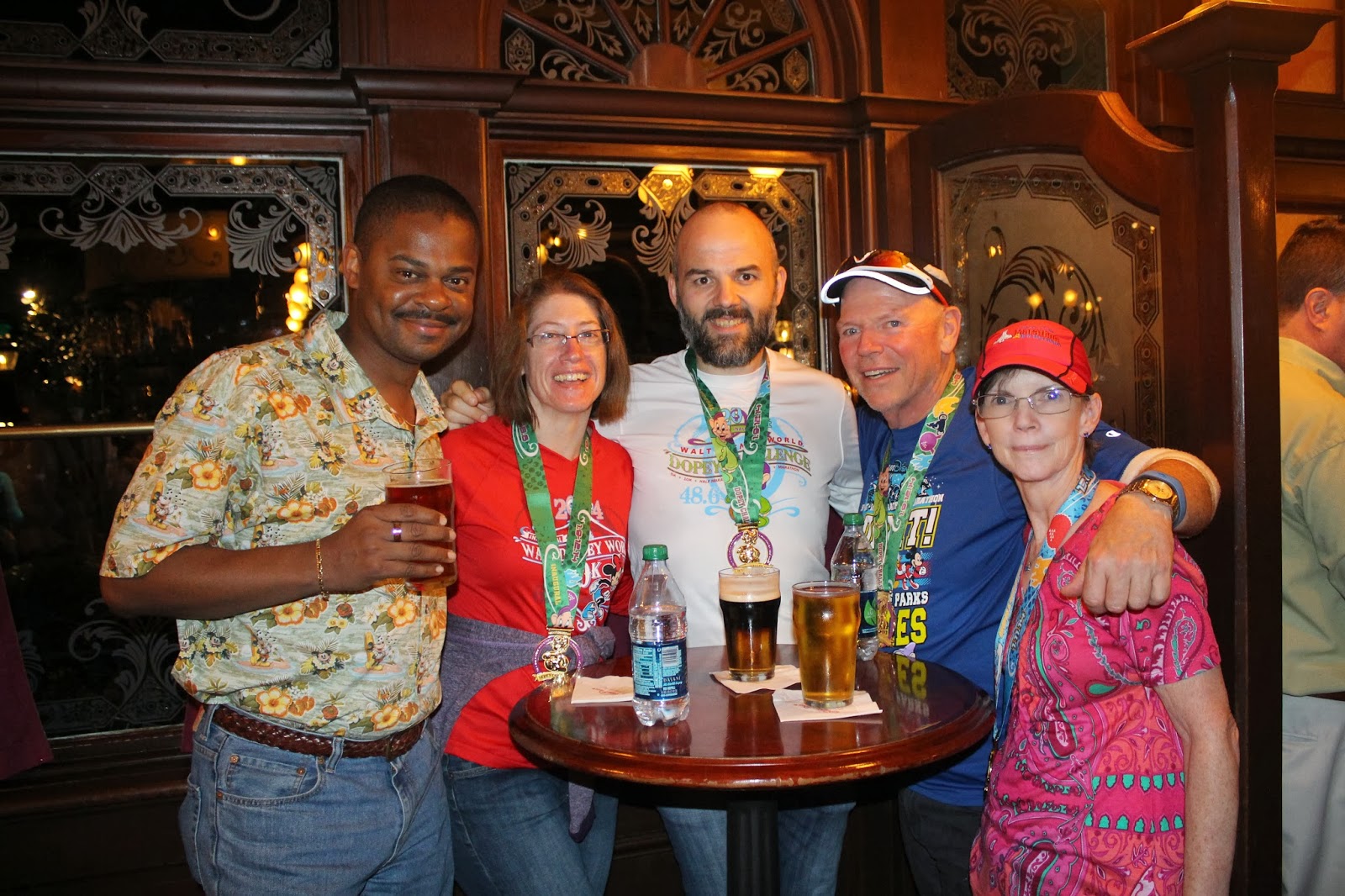 Final results for the Dopey Challenge are available here and further photos here.
Posted by Chris Mills at 12:40