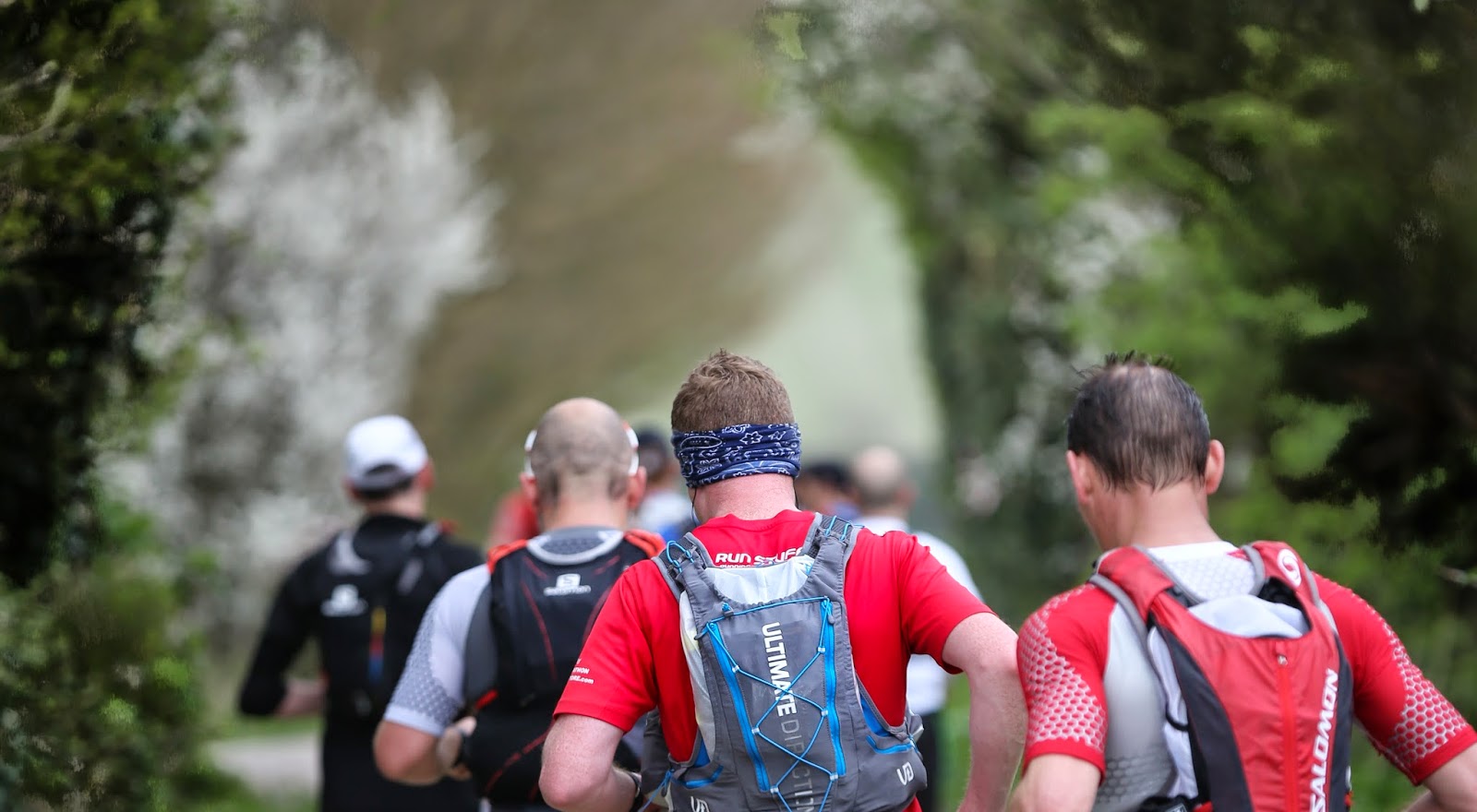 The first major goal of my 2014 season, a fifty mile race through the wonderful southern counties of Wessex and Sussex along part of the South Downs national trail. In its second year, with the inaugural 2013 event suffering from seriously bad weather, this years forecast looked to be slightly more forgiving to the 320 odd starters (from 400 entrants).
After a short race briefing by James Elson (RD @ Centurion Running) and the mandatory kit checks (expertly overseen by Nici Griffin), we were released into the wilds of the downs at bang on 9am.
My "A" goal was to complete the race sub 9 hours with a "B" goal of sub 10 hours. Both of these times would see a large chunk of time knocked off my 50 PB of 11 hours 27 minutes set at the NDW50 in 2013. So with a race plan in my head and written out on paper in my pocket I set off to hit my goal. Having put in some hard training over the winter months, with the help of James Elson, I felt better prepared than I was for any of my events last year.
The first section of the course loops up and around on to the national trail and includes some single track that I wanted to avoid getting held up on, so I set off a little quicker than my pacing schedule to ensure I was up front for this part. With this section behind me, I settled in to an easy pace of around 9.30 min/miles and enjoyed the rolling trail whilst chatting to some of my fellow runners, including Tim Lambert who I knew from the Social Ultra scene.
The first aid station was around 11 miles in and quite busy when I arrived. I decided to continue on to the next stop at mile 16 before stopping for water and so I cracked on and left Tim to top up his bottle. With a larger field than other races I'd entered, it took longer than expected for the field to thin out and there were still quite a few people around at the second aid station.
I was bang on schedule for my "A" goal and the refuelling was going well. I'd settled on chocolate hobnob biscuits, shot bloks and cashew nuts with the odd s/cap to help with the electrolytes and of course good old water to keep me hydrated. After each aid station was a decent climb, so I took this opportunity to eat as I hiked up the climbs. There was about 10 more miles to the next stop and I knew from past experience these miles are often the darkest moments of the race. Not quite the wall but certainly my body goes through a change around mile 20 that I have to fight my way through. 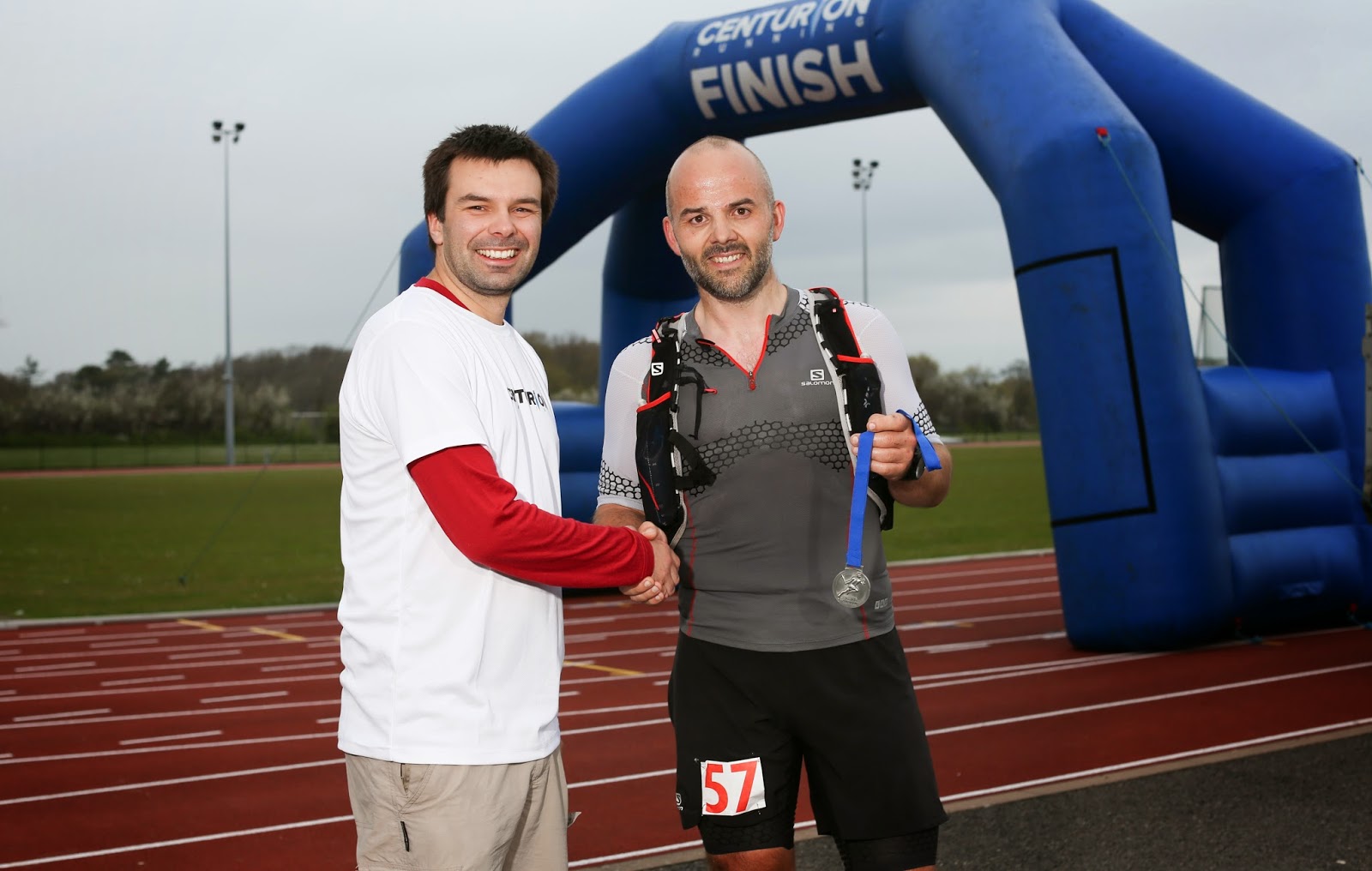 It was around mile 22 where I got my fuelling wrong and took an extra s/cap which bit me fairly hard and was compounded with some stomach issues probably from too much sugar too early. This prevented me from taking on any more fuel and I started to slow a little, only just hitting the 26 mile aid station on schedule.
The impending second half was not the nicest of feelings and for the next few miles I thought of nothing other than quitting at Southease (33 mile aid station) where Nikki was volunteering. I kept telling myself a DNF was perfectly acceptable, with my excuse slip already filled out with stomach issues, hamstring pain and swollen hands (again). As I slowly approached the aid station, I heard a shout from behind and turned to see Tim approaching with a smile and something like: "I didn't think I'd see you again until the finish"....
That helped turn me around, just seeing somebody who (kind of) knows me, with a smile and some helpful encouragement, spurred me on and I decided there and then quitting wasn't an option. I would get in to Southease, fill up with water, kiss Nikki and get on my way again. And that was exactly what I did, heading up the hill and into the low cloud that was blowing in and threatening perhaps a little rain (which it didn't).
Tim and I climbed this next section together and I'm sure if we'd recorded the conversation we would have sounded like two old women complaining about their latest illness. Him moaning about his feet (he'd cleverly worn zero drop shoes) and me with my stomach/hamstring issues would have provided enough material for at least 2 if not 3 Womens Institute coffee mornings. We discussed the pros and cons of cows with horns, how cool it would be to see a bull with both horns and udders and generally shot the shit about both farmyard animals as well as what a Zebra would do on an ultra (thank you James Adams - apparently he has a book out, who knew!).
As we both had set off with similar goals, we both discussed how the sub 9 hours was slipping away from us and that moving to a sub 10 goal wasn't terrible and still a good finishing time for us given our previous finish times. Getting in to the 41 mile aid station we were both on our 4th or 5th wind (the 2nd wind was used up long ago) and realised we could probably still make the sub 9 hours with about 8 mile left to go and almost 2 hours to do it. I took on some coke and two pieces of mars bar and we set off, but eating was to be my downfall and my stomach issues returned swiftly.
Being the true gentleman that I am, I informed Tim that I didn't want to hold him back and I'd understand completely if he wanted to go on and get his sub 9 in but I didn't think I'd make it. He didn't break stride or say a word to me, he just took off like a Zebra being chased by a cow with horns (not a bull) and that was it, without a by your leave mate, he was gone! Being the bigger man (in all respects) I shed a few tears and then put my head down and powered up the hill and down to the final aid station.
Topping up with a little water and making the final ascent I bumped into a mountain biker coming the other way, swearing under his breath about some ginger runner pushing him off the trail. I paid him no attention and continued to the top where I saw the friendly face of Drew Sheffield who informed me to get my arse in gear and start running. He also informed me Paul had won in 6 hr 11 minutes and that I could make it to the finish in 21 minutes, if I ran as quick as Paul had.
I checked my watch and realised I could still make it, so with a good downhill in front of me, I pushed hard, overtaking a few people on the slippery rocks as I flew (relatively) down into Eastbourne. I saw some familiar faces along the roadside cheering us along as I made my way past the hospital, looping back around the other side and in to the running track. What felt like a 1600 metre track in front of me and with about 2 minutes to go by my watch to get around the final 400 metres, I pushed hard. This is where some of the speed sessions had helped, not so much for the speed but so I knew what the pain would feel like pushing hard over the line (oh and overtaking somebody in the final 100 metres too, sorry!).
It was done! Nothing more I could do about it, now I just needed the official time. Would you believe it?
My time was 09:00:00! Missed the sub 9 by a second but I'd still knocked 2 hours 27 minutes off my PR and I'd had what I'd call a bad day at the office. 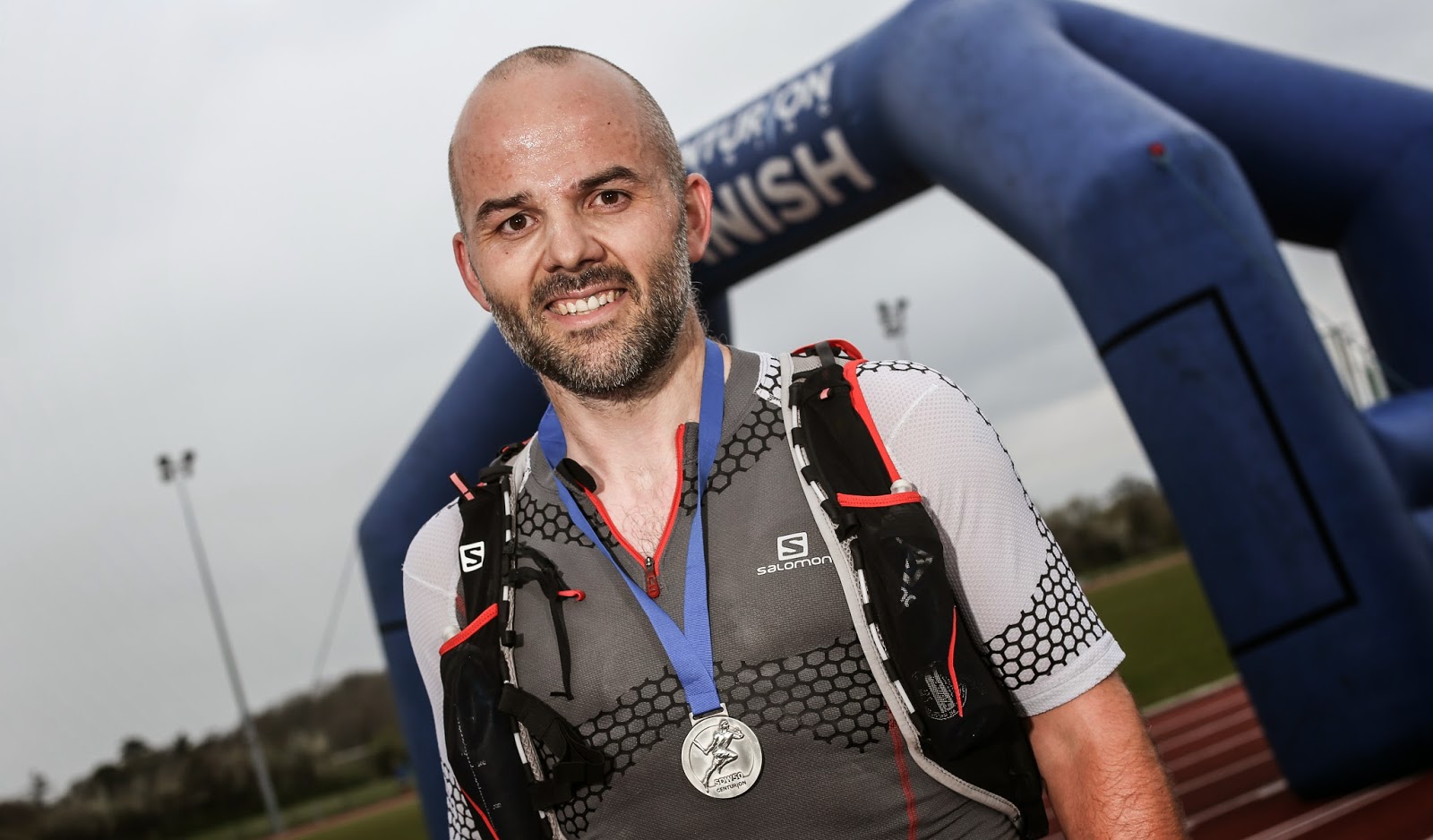 What a race....really good fun, made even more special because of the people. The volunteers are amazing, they know how to look after people on and off the course and we couldn't do it without them. Then of course you have the Centurion crew themselves who are the epitome of race organisers, from Nici, Drew, Claire, Alex, Charlie and the rest of the team (apologies for not knowing everyones names) and especially to James Elson. Great job guys and see you at the next one!
If you want to read the other side to this race report, check out the Ginger man's blog over here....
Posted by Chris Mills at 23:01