Returning to the Boston Marathon

Returning to Boston in 2014 was a given and something both Nikki and I would have done I think even if she hadn't been granted a spot on the start line.  There was unfinished business that needed completion, an itch that needed scratching, a solitary mile that needed running, a finish line that needed crossing. With the BAA granting all those a spot at this years event who didn't cross the finish line but who had made it halfway, we had even more reason to return to Hopkinton, MA for the Easter weekend.

We arrived late on the Thursday evening, having left the UK on the last flight out so as to reduce holiday usage to a bare minimum of 1 day. On Friday we both enjoyed a little trail run around a local state park before heading in to Boston to collect Nikki's bib number and then watch the Red Sox play in the evening.  This year the weather was inexplicably cold, which we hadn't packed for, to which I can attest as Nikki had my coat on having not thought to bring hers.  We left the game early due to the cold weather and the fact that Boston were getting whooped.

Saturday morning we were up early and back in Boston for me to run my marathon....ok so it was only 5km but it felt like a marathon to me.  This was my way of getting involved having been so close to the bombs last year and as they'd specifically prevented bandits from running this year it was my only avenue knowing I'll never run a Boston qualifying time. 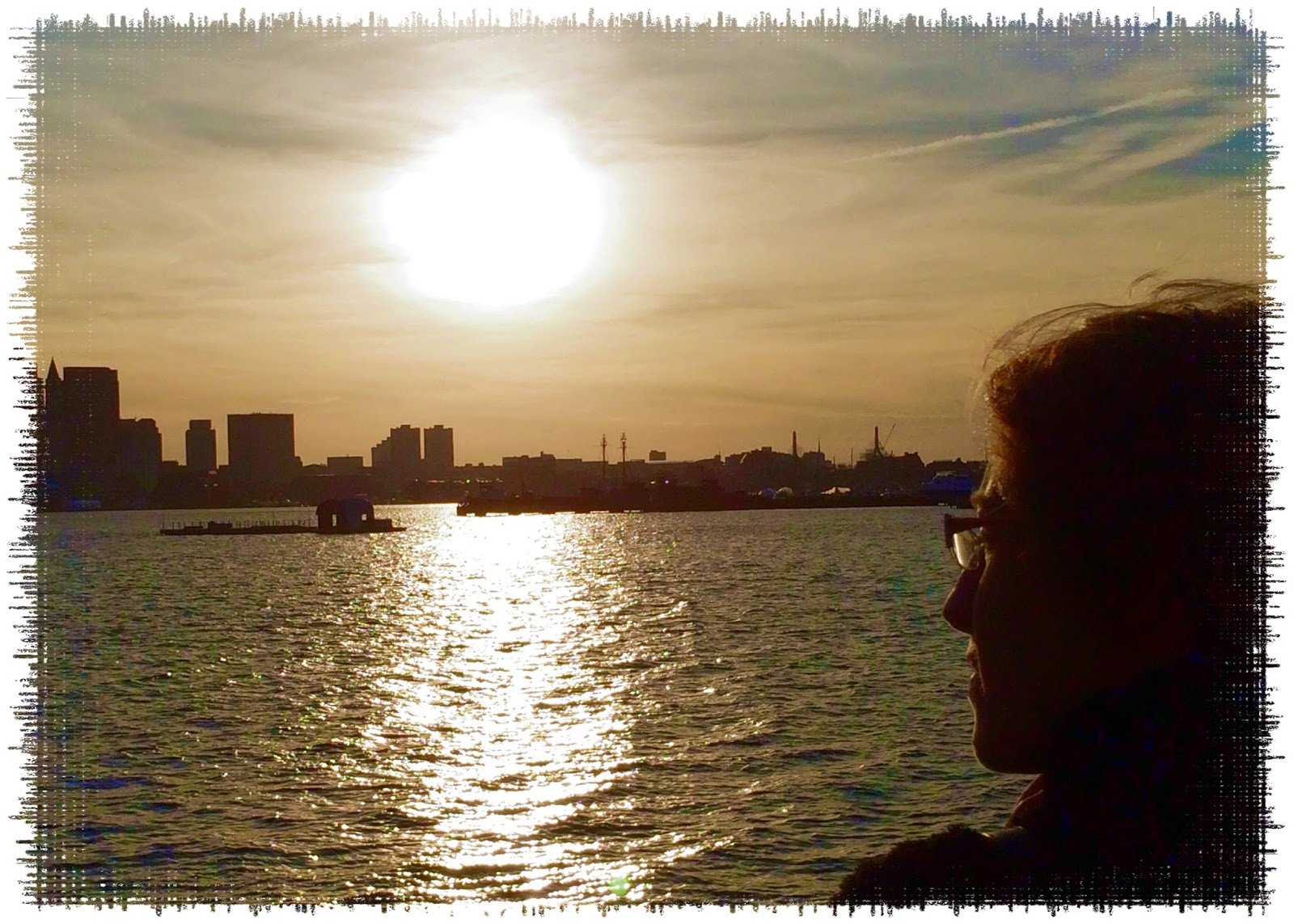 Saturday evening was emotional as we attended the Respite Center BBQ hosted at EMC headquarters. Seeing Mary and Sharon again and the familiar faces of Mikey, Amanda and Amir as well as others brought back the memories.  Sharon remembered standing near me when the first blast went off, hearing this and everybody else's accounts reminded me how close we came to meeting our maker that day. We have a lot to thank the Respite Center for, especially Sharon and Mary who got us those passes, that moved us from harms way.  I will never forget!

Sunday was a lazy day, with Nikki relaxing with some light shopping and an early Italian dinner with Amir, Amanda and Fabio, everybody was keen to get their heads down in preparation for the big day.

Monday morning I dropped Nikki at the Respite Center near the start line early doors, due to heightened security I had to get the car out of the area before the roads closed at 7am. This provided me with plenty of time to get into Boston and get parked up on Clarendon street before those roads closed at 8am.  Nikki would have the luxury of avoiding the athletes village and could relax with the other EMC and Respite Center team runners before heading through yet more security to the starting corrals around 11am.

Prior to the wheelchair athletes starting there was a moments silence held at 0845 in both Hopkinton and in Copley square.  The silence in Boston, in memory of those who lost their lives or were injured last year was, metaphorically, the noisiest and most powerful retort the running world could lay down in the face of terrorism. To say emotions were running high would be an understatement, as all eyes watched how the running community would respond.

And respond they did, with the start of the race underway, the people lined the streets cheering and shouting at every runner who came past them, from the elites to those less able, from old to young, they all received the love and admiration of the people of Boston.  To have the privilege of seeing and hearing these people all along the course help and encourage complete strangers, all standing shoulder to shoulder against terrorism, was inspirational and restores your belief in human kindness.

As the day drew on, the temperature increased to probably just above what I would consider comfortable, especially as most people would have trained through winter, they were going to suffer slightly more than anticipated.  This was true for Nikki, who also had the misfortune of throwing what she thought was a cup of water over her head but turned out to be a sticky Gatorade energy drink.  This reminded me of Fabio's story of 2013 when he grabbed what he thought was food on a stick and popped it in his mouth at the same time as the guy shouted "don't eat it, it's Vaseline".  At mile 20 your brain doesn't always process things in the correct way. 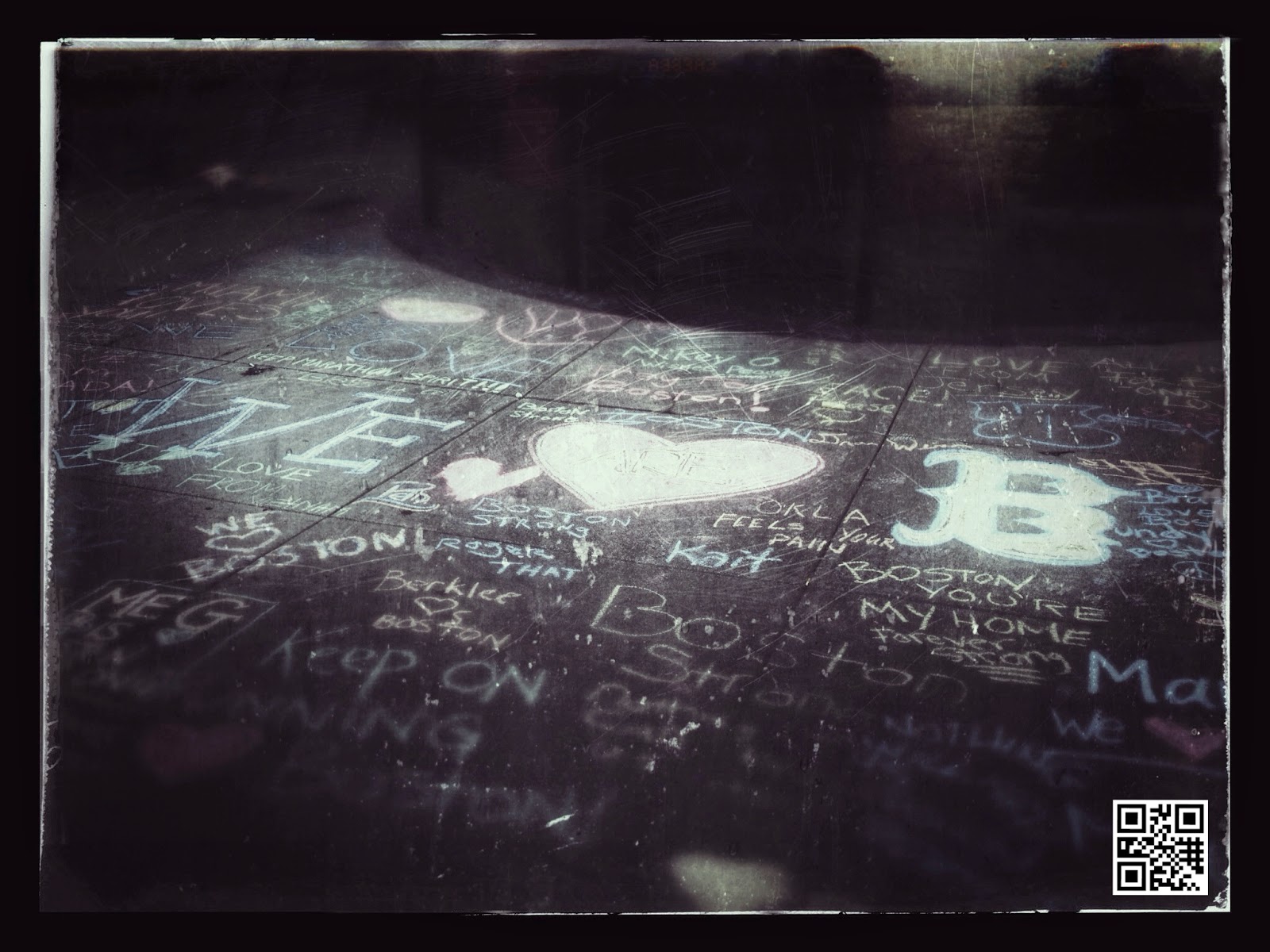 Walking around the finish area and seeing the tears (of joy I hope), the smiles and the general good spirits it was clear to me that Boston had responded in the best possible way, by putting on a bigger marathon event than ever before (36k runners) and showing the world that it is possible to protect 26.2 miles of streets.  This was likely the safest place in the world, with a heavy Police, Army and I'm sure FBI, CIA, etc presence along the route with numerous helicopters flying backwards and forwards and security checks for everybody getting near the course.  I hope that this isn't a sign of how these events have to be organised in future and some "normality" can return next year.  It is heart warming to know that it can be done as it would have been easier and cheaper for sure to cancel the event but that would have sent completely the wrong message to the world for sure!

Nikki completed her journey crossing the finish line 1 year 4 hours and 30 minutes after it started in 2013. She ran an amazing race and although she had some stomach issues and the heat to deal with (it's apparently harder for gingers), it was always about the journey rather than position or time. I can't say if we'll be back to run Boston again but we will certainly return as it's a great city and I feel I have a connection with the people as the memories of 2013 and 2014 marathons will be permanently ingrained in me forever.  Boston is Strong and long may it remain so!