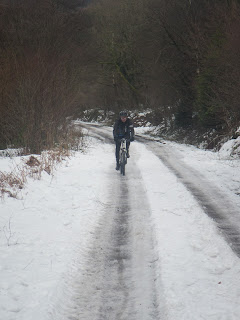 Stretching south from the market town of Brecon through the valleys and into the centre of Cardiff, the Taff Trail is an easy going pathway that takes in historical architecture and awe-inspiring views, passable to those on bikes, horseback or on foot.

It was a cold yet dry(ish) morning on Saturday 26th January when Chris Hyde and I set off along the Brecon canal, our destination central Cardiff weather permitting. With the snow of the previous weeks still on the ground, compacted down into sheets of ice, neither of us expected to be able to get all the way to the end of trail.  The first few miles were taken slowly along the towpath with the threat of taking an early morning dip somewhat undesirable, we eased our way into the 55 mile journey.

With Chris testing a Garmin, it didn't take long for our first navigational error, just as we entered Talybont-on-Usk, where we dropped down on to the main road to avoid the sheet ice we missed the right turn up the hill to the reservoir.  Subsequently we turned around but then headed upwards on the wrong road, but it turned out all right in the end, only having climbed a few hundred metres higher than necessary and clambered over fences and waded through knee deep snow drifts - all good fun of course! 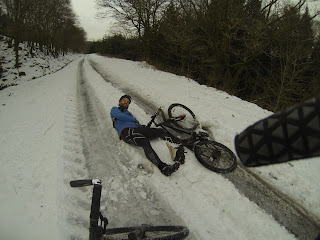 The views across the Talybont reservoir and the backside of Pen-y-Fan from here are majestic, enhanced by the snow capped hills surrounding it.  We corrected our earlier mistake by heading downwards towards the water, which is when Chris got all excited as we tracked down quite a steep and technical rocky pathway/stream; excellent fun even if I did keep the back brake on a little too much.

Now we were back on track we started to climb again although the icy road was becoming more and more difficult to keep traction and we both had our moments, just managing to kick out of our pedals in time except in one case where I hit the deck, much to Chris' amusement.  The upwards climb took an age, with more pushing of the bike than riding until we eventually managed to get out onto some slightly more ridable terrain.

The Taff Trail follows an old railway line, along which you see lots of old bridges and some that are still in use today by rail and cars.  At least one of these was built by the infamous Briton Isambard Kingdom Brunel, who was responsible for diverting the river Taff to reduce the flooding of Cardiff's mainline railway station. 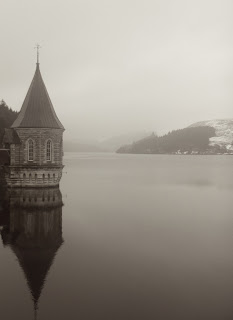 Our speed started to pick up and we were soon entering into Cefn Coed, where some additional chocolate was munched before continuing the journey southwards.  I kept telling Chris that as we dropped out of the Beacons we'd soon see the end of the icy patches and we'd make up for this slow riding.  This of course wasn't the case until we were basically in Cardiff much later in the day.

The trail splits just north of Cardiff and you have the option of taking the uphill pathway which leads you around the hillside and drops you down into the car park for Castle Coch.  This was an unexpected detour that we knew we could have avoided, except neither Chris nor I noticed the pathway split and before long Chris was bitching about another uphill section.  All was forgiven with the view of the Castle and some additional downhill riding to boot. 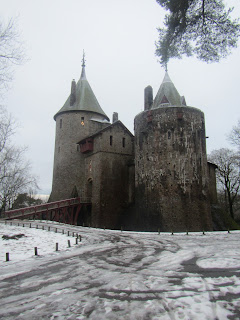 Amazingly the weather held for almost all of the journey, with only a short spell of rain, which given the 8 hrs we spent on our bikes I was very thankful for.  In my head I'd thought the interesting part of this trip would be the first 25 miles of riding through the hills and that the 2nd half would be somewhat boring, following the river and navigating the towns and road system.  In fact the 2nd half was really enjoyable, taking in some of the sites, the old bridges, the railway line, the rock formations, Castle Coch and then Cardiff itself, I really enjoyed myself and would highly recommend a visit, if not the full trail itself.