The Fan Dance is an infamous route over the Brecon Beacons, made so because it's part of the selection marches completed by all British Special Forces.  The route is 24km with over 4000ft of climb and includes the highest peak in southern Britain (Pen y Fan) twice! 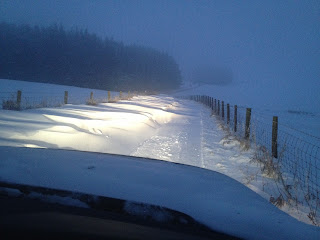 I awoke on Friday the 18th January to a white world outside.....our village just north of Brecon was cut off.  Not great when you don't yet have a phone line or Internet connection, even worse was the thought that they may cancel the Fan Dance Race the next day.  Hmmm, what to do?

Of course I had to attempt to get to work, so I put the shovel in the back of the car, the snow chains, jackets, torch etc and headed out with Nikki to get to the office, about 10 miles away.  Our house is down in the bottom of a valley, both roads leading out have steep hills, up which you have to go to get to Brecon.  Our Land Rover Discovery got almost all the way up before loosing traction, so I backed it up, jumped out and put the snow chains on, which made mince meat of the hill.  Getting to the top I could now see the 3ft snow drifts covering the road, getting to the office wasn't an option, the road was impassable for now but at least we had mobile phone reception. 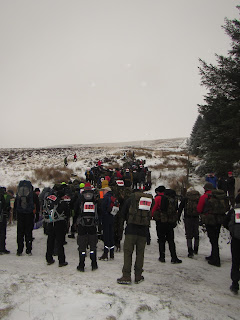 Friday was spent continually driving up and down the hill (carefully), checking emails watching out for the email notification cancelling the race.....but the email never came.  This race is organised by ex-SAS guys and undoubtedly they think nothing of the bad weather and when an email finally arrived it was to tell me to man up and get to the start the next morning, the race was on!

Next up was the possibility that Will and Tom wouldn't be able to make it to the start line due to the roads in the surrounding area.  Tom ended up trying to drive in on Friday night but gave up and went home after not getting far in the conditions.  Will and I spoke on Friday and due to work commitments he had to stay near camp for the weekend so he wouldn't be at the start line either.  This was a mental blow, not only was the weather terrible but the two guys I was planning on  running with weren't going to make it, not good.

It took a lot of self discipline to get up at 6am Saturday morning.  It would have been so easy to sack it off and stay in the warm.  I didn't, I got out the door and started the 12 mile journey down the road to the start line at the Storey Arms.  That journey took just over an hour, I had to dig the car out of a snow drift that was so deep the car wouldn't power through it even with chains on for grip.  Upon arrival at the start I was amazed to see the car park full, resulting in everybody parking on the side of the road in the deep snow.  I had kind of thought I'd be the only one there, so this was a real moral booster! 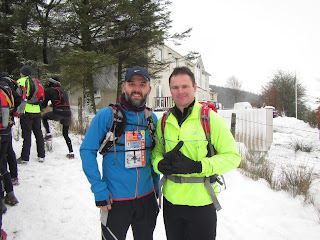 After registering and collecting my race number, I got a text from Will to say he had arrived at the start line.....amazing news!  We bumped in to each other just as the fully laden racers got underway at 10am.  These entrants were carrying 35lbs backpacks and obviously had a screw loose upstairs.  After watching them head up the hill, some of them actually running, Will informed me he was able to race after a quick call with his boss. This was excellent news.

An hour to the off and I needed to get my stuff sorted; due to the digging out of the car, my shoes and socks were already soaked through, not the way I wanted to start the race.  So, I headed back to the car with Will and changed in to my spare socks and Salomon Speed Cross shoes, along with my YakTrax. Luckily I had brought spare shoes with me, I'm not sure I could have made it round with cold wet feet. 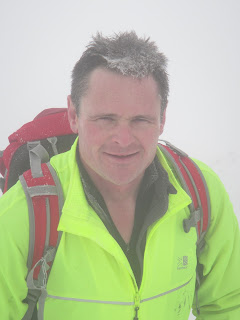 It was at this point that Will headed off to sort his kit out, we agreed to meet on the start line.  I tell you this because Will left a very important piece of kit in my car, his hat and gloves were on the back seat, where they would remain until I found them on Sunday afternoon.    On the start line, Will informs me he has forgotten his hat and gloves, so I duly hand over my spares. Now we're even, if we get cold wet hands there are no spares on this trip over the Beacons.  Why do the 7 P's spring to mind here?

The RD gave us a briefing a few minutes before the hooter is blown and we're off.  Given the number of entrants and the almost single track pathway, it was a few minutes before we got past the actual start line and the first few hundred metres saw a bit of off-roading to get passed some slower starters.   Normally the pathway up Corn Du is a well trodden semi-paved footpath, but today with 6 inches of snow it was difficult to get grip even with YakTrax. That said we made it to the top of Corn Du and then Pen y Fan in about 45 minutes, only 12 minutes off the pace I had completed the weekend before without the snow.

The route then takes you over the back of Pen y Fan now and down what's known as Jacobs Ladder (although that's not marked on any OS map I've seen).  This is a particularly rocky and in these conditions extremely slippery as well as icy pathway between Pen y Fan and Cribyn.  It's on this part of the route that we should have navigated around the south of Cribyn but we missed the turn and started to ascend once again.  Will and I stopped to check the map and discuss going back or continue over the top, a slightly shorter but harder route.  Some other competitors stopped and as a group we decided onwards was better than backwards.  What's another peak hey? 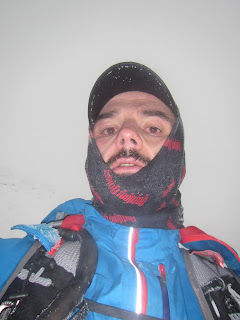 Running down the roman road to Tal Fechan Forest was nice and fast, although Will took a tumble on the ice and ripped my gloves, lucky he wasn't wearing his own.  We were both surprised at how quickly the turnaround point came upon us, according to my GPS we were about a mile short on the race distance.  The DS informed us that due to snow drifts they'd cut part of the route as it was impassible and not safe.  We'd made it half way in 1 hour 29 minutes and covered about 6 miles......sounds rubbish compared to running on normal terrain in good conditions.

After taking on some food and water we started what I had though would be a nice gently jog back up the Roman Road, how wrong I was.  This was a slog and took a lot of effort, with visibility decreasing and the bitter easterly wind picking up as we climbed higher.  This time we weren't going to go over the top, we'd navigate around Cribyn and up the ladder to the summit of Pen y Fan for the second time.  It was on the ladder that Will started to get cramp and he had to stop and take on further fluids and a gel from his rucksack.  I was sorted for drinking while on the run as I had my Salomon backpack with water bladder and apart from the nozzle freezing a few times, it worked really well for me. 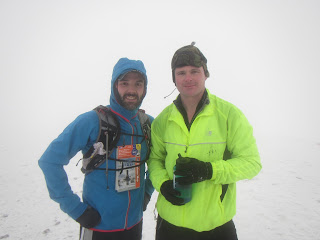 At the top of Pen y Fan we stopped for a quick photo (on the right) and then headed around the back of Corn Du before starting the descent down to Storey Arms.  The climb down was a lot of fun and I was so pleased to have my YakTrax on, they became my best friend and gave me the confidence to run down the hill rather than have to step down like other competitors were doing.  We overtook quite a few people on the journey down, although we also came across a casualty awaiting mountain rescue.  We checked there was nothing we could add and then continued down the hill to the finish.

I crossed the line in 14th place in a time of 3 hours 10 minutes, Will was 16th and a few minutes behind me having suffered a further cramp on the final stretch.  The sense of achievement was immense and greatly enhanced knowing the conditions we'd run through.  The following morning I was still on a high from it, what a feeling. 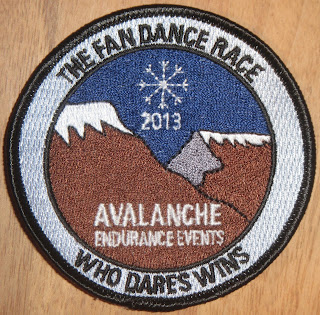 An amazing race and certainly something I'd like to do again in the Summer so that I can get a time to compare against.  I was impressed with all my gear, I didn't feel cold at any point on the route and I can't imagine worse conditions.  The only thing I would alter on another winter round would be to add a water bottle, so that a frozen bladder doesn't impact drinking.  Otherwise a good run and certainly good preparation for the 10 Peaks in September.

Finally I'd like to thank all the staff at Avalanche Endurance Events for organising the event.  It was cold running over the top of the hills, I can't imagine how bad it was just standing around waiting for everybody to come by.  Thanks very much, see you in the Summer!

Here is a video of the actual event - good work recording it Mike Richards.