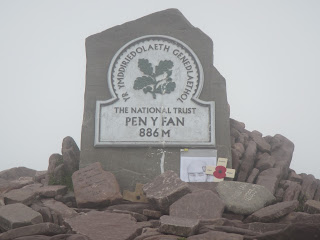 Getting to the start line of the Summer Fan Dance was in stark contrast to that of the Winter edition, the drive from home not requiring snow chains or requiring the use of my shovel to dig out the car from snow drifts.  That said, it was scheduled to be another hot day which would potentially make the day just as challenging as the snow, if not worse!

After registering for the race, Nikki and I watched the load bearing nutters head off up the hill and in to the mist that was covering our view of the top of the mountains.  They were a little late setting off, not entirely sure why but this didn't leave me much time to get back to the car for my gear.  A quick turn around at the car and I was just walking back to the start to be shouted at to hurry up.....so off I trotted to discover they'd already started!  GO GO GO!  I was 2 minutes behind and I hadn't even started the climb yet! 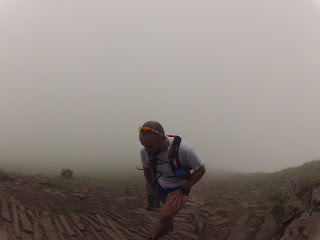 I knew I could climb fairly quickly and by the time I hit the top of Corn Du I was in 4th place having pushed myself to the top of Pen y Fan without stopping for a breath or a sip of water.  The weather was perfect, a slightly cold breeze and lots of mist helped keep the temperature down and I caught up with the person in 3rd place as we descended down the Roman Road.

The turnaround point on this "Dance" was different to the Winter finish line, due to snow issues getting to the official turn point.  Although when we arrived at the turn around point all 5 of us were surprised to hear that the DS (Directing Staff) were nowhere to be seen.  I took a quick fix on the GPS to prove we'd been to the actual point and we all headed back up the hill.  I subsequently found out that the truck with the DS and our water onboard had been held up as a tractor had caught fire and they arrived about 3-4 minutes after we left the RV.  That's two races where the turn around DS haven't managed to get to their designated position ;-)

Comparing the Summer and Winter editions, apart from a 20C swing (or more) in temperatures, it was really tough under foot on the rocky paths, especially where they have been manmade by the National Parks.   My Salomon Speed Cross shoes were excellent in the Winter proved to not have quite enough cushioning for the rocky and dusty terrain the mountain had to offer and my feet were a little sore on the return leg. 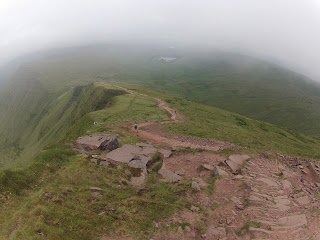 I alternated between power walking and jogging the return journey, loosing a few places on the way, dropping down to 8th overall.  I traded places up to 7th as the ascent got a little steeper.  I pushed myself up Jacobs Ladder, talking to Neil (a Winter Fan Dancer) on the way up, who also shot some video (links below).  I checked in with the DS at the top before taking the direct route back over to Corn Du and then straight down through the mist in search of the red phone box.

Splashing my way through the river, I may have surprised a few walkers and their child who were carefully avoiding the running water by using the stepping stones.  The cool water brought some instant relief to my tired and sore feet but it was short lived as I headed up the valley on the final ascent of the day.

As I descend to the finish point, I took the paths to the side of the official track to lessen the impact on my feet and knees.  This may be why I was caught off balance as I got to the finish point and moved on to the official path again.  I reached across to stop my watch, as any runner will tell you this is vitally important, I caught my foot on a rock and bang, over I go!  Just as I hit the deck my right calf cramps and for a moment I don't feel anything other than embarrassment and then my knee, calf, hip and elbow catch fire as I've taken the skin off.

Ken rushes to my aid and I'm on my feet before I know it and being awarded my finishes patch.  Nikki is right there and caught the whole thing on camera and I've included here for your enjoyment.  The camera was handed around the BBQ we held after the event for all to see, so I've grown somewhat thick skinned to the ribbing that a few more people seeing it will make no difference.

An improvement on the winter race, I finished in 7th overall in a time of 2 hours 42 mins (my watch time).  The winner was about 14 minutes ahead of me, as well as having a few years on me too; you can see his finish interview on the BBC website.

I'll be back for the next race for sure. Ken and the team at Avalanche put on a great event and the competitors spur each other along as they pass by each other creating a fantastic team spirit.  See you next time.